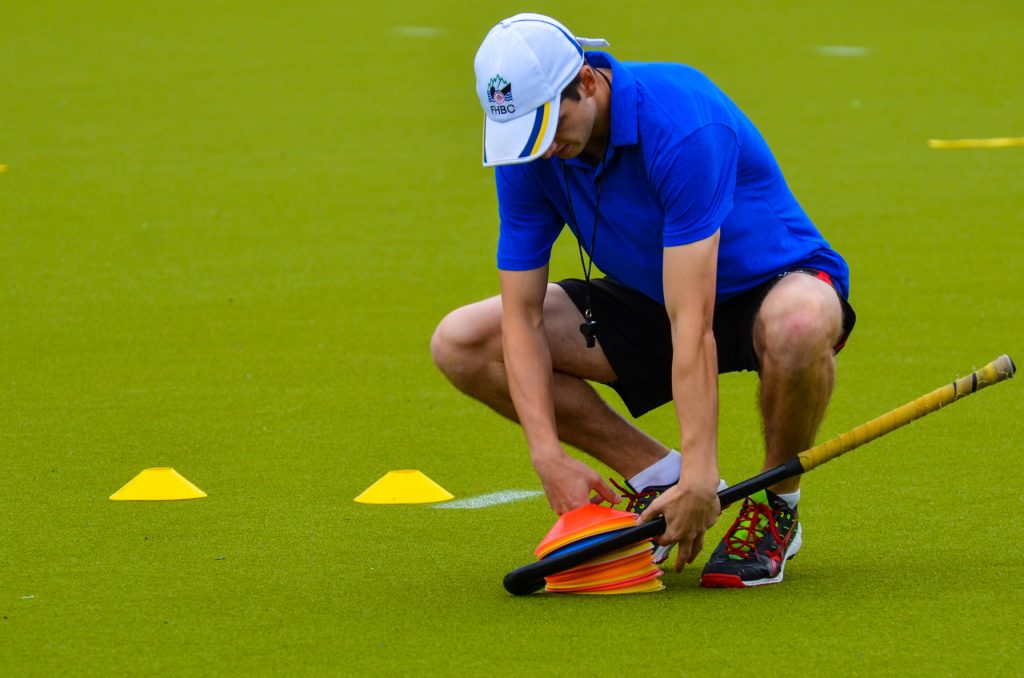 Field Hockey BC is seeking coaches for our Schools Program, which is designed to introduce the sport to elementary and middle school children. Each program takes place in a school, during school hours, over the course of 3-6 weeks.

Coaches will be paid $25/hour. To be hired, coaches must have weekday availability and submit a Criminal Record Check. 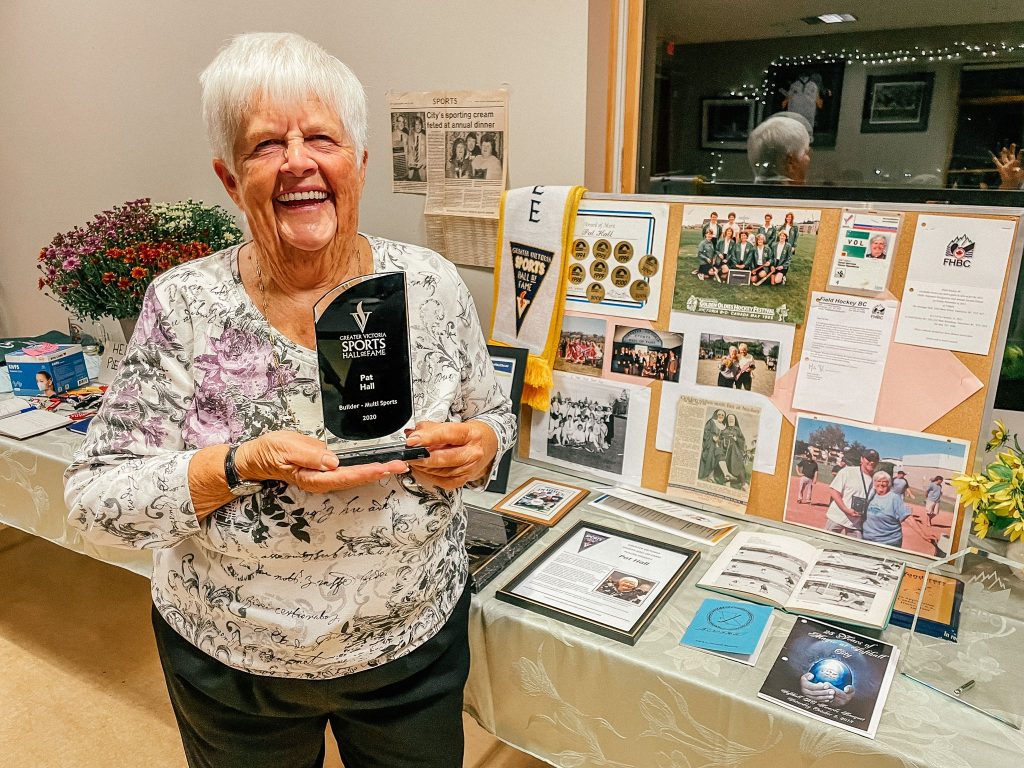 On Sept. 17, a small group of the Vancouver Island field hockey community gathered to have a belated celebration of Pat Hall’s 2020 induction into the Greater Victoria Sports Hall of Fame.

The evening featured an impressive display of articles, photos and memorabilia spanning Pat’s involvement in field hockey. Long time friend Shelley Andrews, who was coached by Hall at Oak Bay High, emceed the event in entertaining fashion, while an impromptu open mic followed. 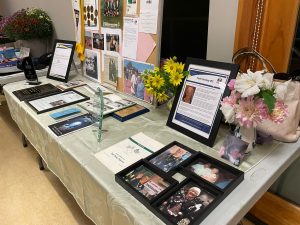 Kind words followed from former VILFHA president Denise McGeachy, current Umpires Association President Alison Sweeten, as well as remarks from Anne Batey, Denise Hall and players who have been coached by or played with Pat. It was truly a community evening with representation from all current clubs as well as past members including Craig Wilson, Liz Munn and Ev Sigalet.

VILFHA hosted the event so that all donations and ticket contributions could support the FHBC Pat Hall Officials Development Award. This award is designed to promote the development of Vancouver Island umpires and technical officials. An award of up to $500 will be allocated each year to successful applicants. In order to be eligible for this award, applicants must be a member in good standing with Field Hockey BC and an active official within National, Provincial or Club based programming.

The award was created by VILFHA when Pat retired from a long, long-standing term on the executive.

VILFHA is pleased to announce that $1,160 was raised last night.

Thank you to everyone who contributed in congratulations to Pat!

See photos from the event last night on Facebook at: https://www.facebook.com/vancouverislandladiesfieldhockey 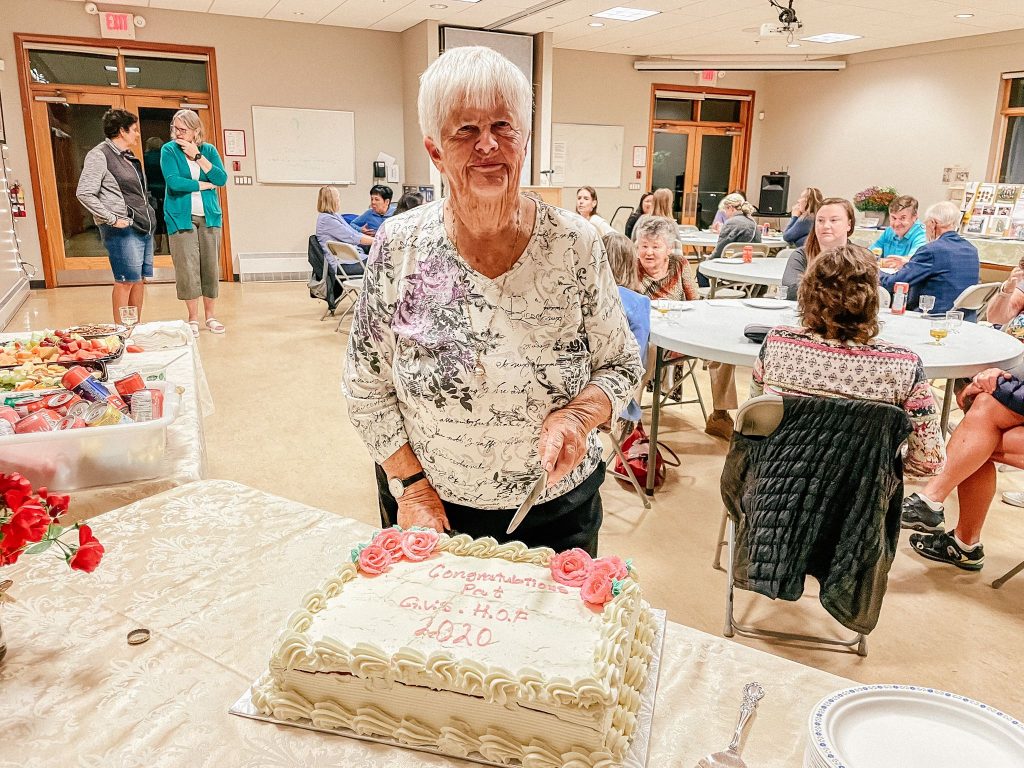 Field Hockey BC is delighted to welcome Patricia to the FHBC Staff Team. Patricia will be conducting a full review of the coach and talent identification program delivered through FHBC over the course of the past Spring and Summer before assisting the Society in the identification of coach and athlete centered strategic priorities as part of FHBC’s new six year strategic plan. The FHBC Board and Staff Team look forward to supporting Patricia as she transitions into her new role and we invite community members to reach out to Patricia to welcome her to the fold.

Patricia is a certified FIH Hockey Academy Level 3 Coach with eleven years coaching experience and has been involved in development and strategic planning for field hockey for over eight years. She was the co-captain of her university team (University of Massachusetts, USA), and was selected to the A-10 All-Conference team three of her four years at university. She is a former national player and captain and represented Trinidad and Tobago at the junior and senior levels for fifteen years before retiring and going full time into coaching.

As a coach, she held the position of Development Head Coach at the Trinidad and Tobago Hockey Board for two years before founding IN Sports Field Hockey Academy with the vision of introducing the sport to non-traditional schools and communities and focusing on development within the 5 – 16 age range. Patricia also coached the female hockey team at the University of the West Indies and was a part of the coaching staff for the Junior Women National team for the last two Junior Pan Am Championships.

Before her career in sports, Patricia worked in the Supply Chain and Logistics field for over six years. She earned her BSc in Business Management (Hons) from the University of Massachusetts and holds a certificate in International Relations. Patricia is a fitness enthusiast and enjoys the outdoors, reading a good book, and spending quality time with her husband and two children. 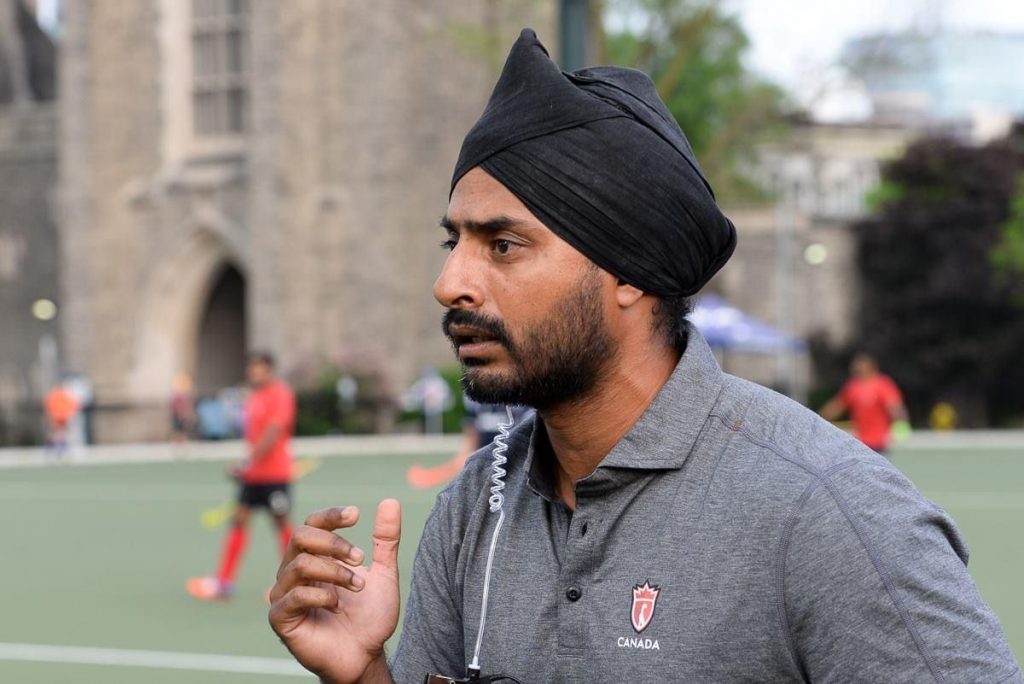 Indy Sehmbi has played a huge role in the development of young field hockey athletes in the Lower Mainland and throughout Canada.

Indy started coaching provincially in 2000 and continued to coach BC Provincial teams until 2013.

In 2009, Indy join the Men’s National Team as a video analyst and toured with the team to Australia, Argentina, India (Commonwealth Games and World Cup), Mexico (Pan American Games) and South Africa for the next two years.

As Indy increased his knowledge the game though his international experience, he decided it was time to put this knowledge to work and joined the Canadian Junior National Team in 2011 as an assistant coach alongside Aaron Guest. 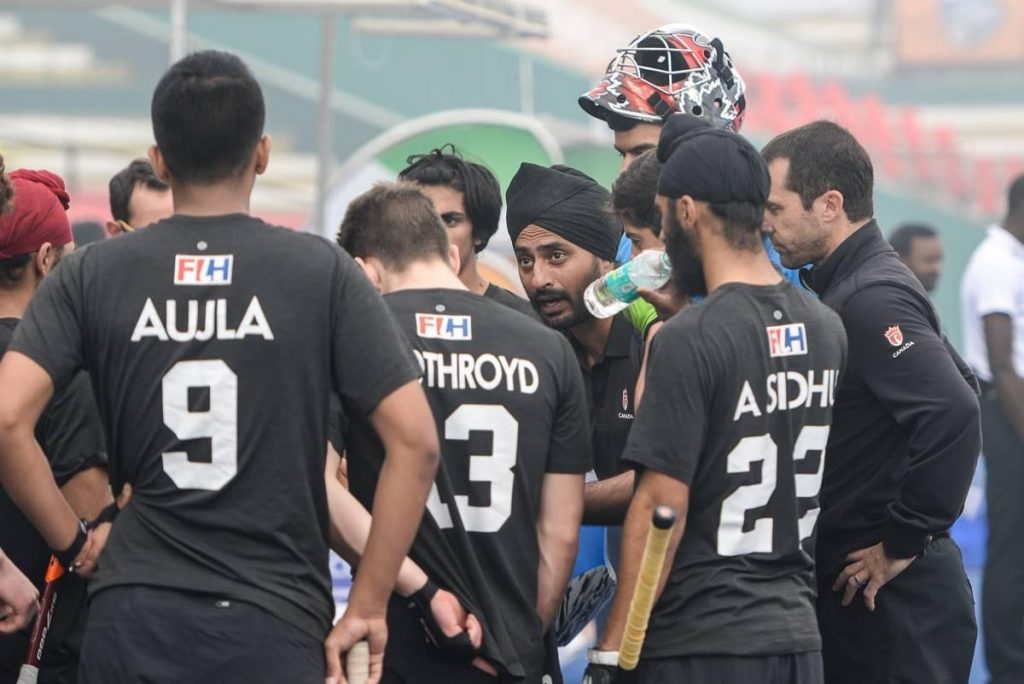 In 2014, Indy coached the Youth National team to the U18 Youth Olympics where they won the silver medal.

From 2015-2021 Indy was the Junior Head Coach.  Indy led the Junior National program and took the team to two Junior Pan American Games (Silver and Fourth Place finishes) and to two Junior World Cups (both in India) 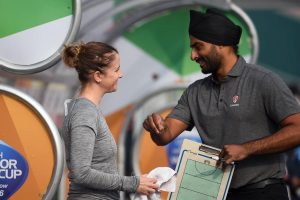 Indy has been such a positive coach and role model for so many athletes on both the Junior National and Club programs. Throughout his involvement with the National and Junior National Team Indy was a driving force with the Burnaby Lake Field Hockey Club promoting the development of young players and solidifying the Burnaby Club as contenders in the Vancouver league year in and year out.

After taking the Junior National Team to the Junior World Cup in December of 2021 Indy mad the tough decision to step aside and take some time away from coaching at the National level.

Indy has helped to develop so many local players and is a coach and person who truly believes in each individual and their potential. Indy can be described as a Coach and Community Builder – one Athlete at a time.

We would like to wish Indy well in which ever challenge he takes on next and thank him for all of his amazing contributions to Field Hockey in Canada.

From proud friends and supports of coach Indhi

Following our Communique #1 and Communique #2 regarding Field Hockey BC’s new Membership Registration System, we are happy to inform that registrations are now open for the 2022-2023 Season.

Please, refer to the Step-by-Step Guide for more information before registering.

To start the registration process, access our Membership Page

Should you require further assistance, support is available by contacting info@fieldhockeybc.com.

You may access the PDF version of this document here.

Further to the first community communique (dated July 8, 2022) concerning Field Hockey BC’s (FHBC’s) new Membership Registration System Partnership with Field Hockey Canada for 2022-23, this communique is intended to direct membership attention to the appropriate section of the FHBC website for a Step-by-Step Guide on “How To” Register for a 2022-23 Membership. As a polite reminder:

To access the online Membership Registration System, an existing or new member is directed to the FHBC Website and specifically to the 2022-23 Membership Page at the following link: https://fieldhockeybc.com/registration-system-step-by-step-guide-how-to-register-for-a-2022-23-membership/

The 2022-23 Membership Page provides detail as to the Step-by-Step Guide on “How To” Register for a 2022-23 Membership, as well as other membership related details. This page will be updated as necessary in the lead into the official opening of the registration system on August 16, 2022. A notice confirming that 2022-23 membership registration is open will be circulated and posted on the FHBC website homepage on August 16, 2022.

FHBC again appreciates that any change to a Membership Registration process has the ability to impact the time taken by the BC Membership to navigate such change. FHBC remains extremely appreciative of the BC memberships patience as we move through this collective change together. Please do keep the membership registration questions coming. These can be directed to the following e-mail address at info@fieldhockeybc.com. The Society staff remain committed to providing as much clarity as possible in the lead into and throughout the 2022-23 season. 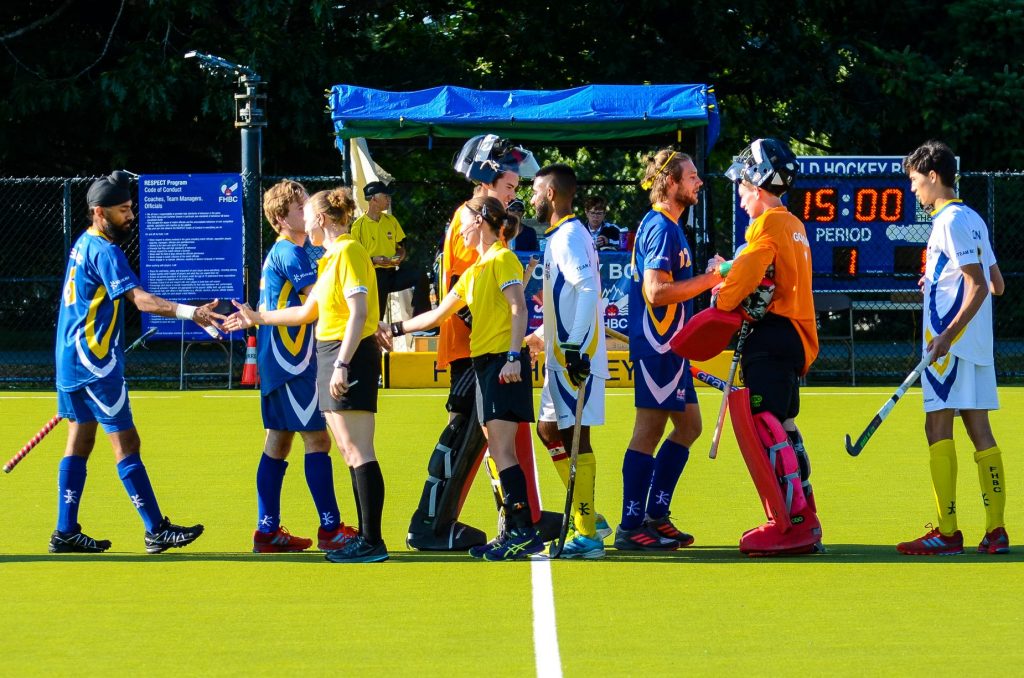 The Under 18 and Under 16 National Championships in Surrey, BC get underway with the first official practice day on July 29, 2022. Competition begins July 30, 2022 at Tamanawis Park, Surrey.

Online LIVE SCORING is available throughout the Championships at the following link: https://fhc.altiusrt.com/

FHBC is pleased to announce that we are now accepting applications for the Athlete Assistance Bursary and the Judy Broom High Performance Bursary. The application deadline for both of these bursaries is July 29, 2022, and the recipients will be announced by the end of August.

Go to www.fhbcfoundation.com for more information and to download the application forms.

You may download the PDF version of this communique here.

This Community Communique acts as the first of three scheduled communiques that will be released over the course of the next five weeks informing the BC Membership of:

Field Hockey BC appreciates that any change to a Membership Registration process has the ability to impact the time taken by the BC Membership to navigate such change. FHBC is extremely appreciative in advance of the BC memberships patience as we move through this collective change together. As this is a partnership between FHBC and Field Hockey Canada, this means that BC members will have the opportunity to receive customer support through both organizations and both organizations are currently planning to articulate how you may connect and contact each organization should you require assistance with the new Membership Registration process for 2022-23.

This project collaboration with Field Hockey Canada is intended to enable both FHBC and Field Hockey Canada to effectively and efficiently manage Field Hockey Participant Data and in doing so assist field hockey planning, assist member communication, and provide transparency and accountability in data reporting (to the Membership, as well as to the Federal and Provincial Government). The FHBC team looks forward to building on this communique in the days to come with the most important “How To Register” Communique #2 scheduled for release on August 1, 2022.

Field Hockey BC is now accepting registrations for a new Provincial Umpire Course that will happen on Monday July 4 & Tuesday Ju5 via ZOOM – spots are limited!

This course is being subsidized this season and is therefore FREE for FHBC Members with a currently valid Membership for the 2021-22 season. The cost of the course for non-members is $85.

Provincial Courses consist of two sessions of 3 hours, including theory and exam. Participants are required to attend both sessions to be eligible to write the exam. Candidates must be a minimum of 13 years by the end of the calendar year to register.