Warning: Use of undefined constant content - assumed 'content' (this will throw an Error in a future version of PHP) in /home/marks482/public_html/wp-content/themes/vantage/index.php on line 16
 Archive | Field Hockey BC

As the BC Organized Sport Sector awaits formal Provincial Government consideration and associated guidance relative to a move to the second stage of responsible return to play, such advancement of stage one guidelines is seen as a proactive next step to continue Field Hockey’s responsible and progressive stance to maintain and comply with the necessary COVID-19 safety protocols. This move to adjust ratios was taken following receipt of feedback from both LSO and PSO activity leaders. Such feedback will remain ongoing and will continue throughout the staged progression towards a new  “norm” for field hockey activity. The safety of all involved in field hockey’s responsible return to play remains the absolute priority, as does the ability of our sport to comply with the necessary safety protocols.

As we all continue to navigate a progressive and responsible return to organized field hockey activity, I remind and encourage all members to take the necessary time to consider return to play activity as an exercise in social responsibility and safety for all. Let us play our part in offering an opportunity to participate whilst ensuring we contribute to flattening the COVID-19 curve.

The Field Hockey BC Board of Directors met on the evening of June 11, 2020 and passed a resolution approving the first stage responsible return to play framework for field hockey in BC (date stamped June 11, 2020), which can be accessed here. The approved framework provides sport specific guidance as to the minimum standard expected for active implementation in this first stage return.

Please, draw your particular attention within the framework to the participant ratios, the requirement for attestation form compliance ahead of every activity session, and the need to maintain standards of health and safety as a priority. The advice provided by the Public Health Office, viaSport, and now the approved PSO framework is intended to allow for LSO’s to develop activity plans and look to the necessary steps to secure appropriate facility permits.

Many members have already requested membership fee refunds or deferrals to the following year, and, in this case, members need to re-register with FHBC prior to active participation. All members participating in LSO, PSO (FHBC), and NSO (FHC) programming must be a registered member in good standing.

You are all invited to the Umpire Webinar – Communication Verbal and Non Verbal via Zoom. This webinar will be facilitated by Lelia Sacré and Tyler Klenk; both are currently FIH rated umpires that have been involved with Field Hockey BC for a number of years.

When: Aug 5, 2020 07:00 PM Vancouver
This webinar has ended. Watch the recording on our Online Field Hockey Resources page.

This is an important letter from Field Hockey Canada regarding Membership Fees for the 2020/21 season.

You can read the PDF version of this document here.

For more details on membership fees and to start your registration process, access this page.

In these unprecedented times, we have all been forced to adopt new measures and modes of practice in order to return to the field of play. One of these measures is the need for additional liability insurance. Having full liability insurance to cover COVID-19 related cases, ensures all our participants, including coaches, board directors and our other hundreds of valued volunteers can return in confidence.

Our thanks to our provincial members for adopting the unified position and standing together as a community to purchase of this insurance. The cost for this peace of mind is $8 per participant. This should be considered as a non-refundable COVID-surcharge which will provide cover for 1 full year. It is a one-off charge which is being introduced much like the other COVID surcharges we are currently all paying for across service and other industries.

COVID-19 Surcharge will become effective September 1, 2020 for all members registering a
membership during the 2020-21 season.

COVID-19 Coverage will be provided for all registered members between now and the end of the
current season (August 31, 2020) without an associated surcharge or fee.

With thanks for your understanding and support. Wishing you a safe and enjoyable return to the field of play. 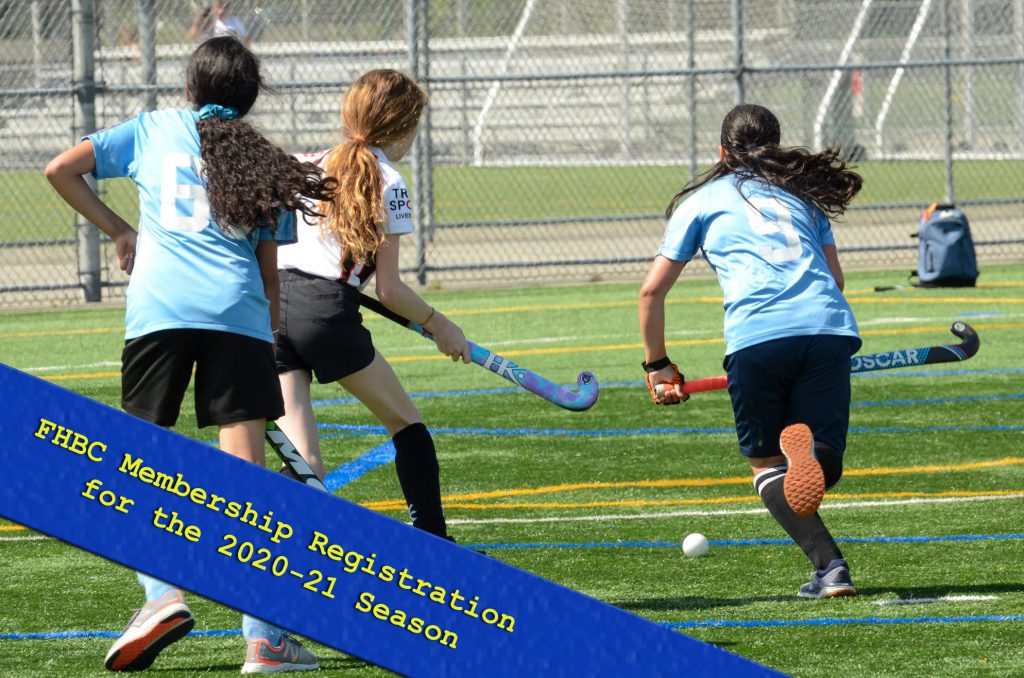 As field hockey starts its Responsible Return to Play in British Columbia, all members participating in LSO, PSO (FHBC), and NSO (FHC) programming must be a registered member in good standing. Click here to start your registration process.

IMPORTANT: For those who have not yet participated in organized field hockey activities during the current 2019-20 season and may now be looking to take advantage of opportunities to return to play during July and August 2020, you can now register as a member and your membership will be valid for July and August 2020, and through to the end of the 2020-21 season. If you paid membership fees in 2019-20 but did not play, and have not received a refund, please contact info@fieldhockeybc.com to request a carry forward into the 2020-21 season.

This carry forward COVID-19 initiative supported by both FHBC and FHC is designed to aid those participants that are new to field hockey or may now wish to re-register, having not participated in the current 2019-20 season prior to July 1, 2020. For those members who may have already requested and received an eligible COVID-19 refund, you will need to re-register prior to participation.

Earlier this season, Field Hockey BC made a community commitment to undertake a performance stream athlete pathway review. The Provincial Athlete Pathway Review Project launched on April 14th and shortly thereafter a Club Feedback Questionnaire was sent to all clubs in the province to solicit feedback that would help inform the development of a new Field Hockey BC Provincial Athlete Pathway and Athlete Program Model. A webinar was held on June 17th which provided an update on Phase 1 of the project, including the results of the club questionnaire.

The Field Hockey BC Board of Directors is pleased to announce the performance stream athlete pathway review has now completed Phase 2 and the project is ready to present the Provincial Pathway Working Group’s draft recommendations to all Field Hockey BC members and affiliated Clubs via a second webinar scheduled for July 22nd @ 6:30 pm.

Webinar #2 will include a presentation on the following:

Field Hockey BC encourages all Club officials and members to attend the July 22nd webinar to learn about the new proposed Provincial Athlete Pathway and Program Model prior to the project’s final recommendations being submitted to the Field Hockey BC Board of Directors. The webinar will include an opportunity to hear about the Provincial Pathway Working Group’s proposed recommendations, ask questions, and provide feedback.

Further engagement between Field Hockey BC and the Society’s membership will occur once the FHBC Board of Directors completes a full review of the project’s recommendations, including a risk assessment and review of the Society’s operational and environmental considerations.

If you would like more information regarding the Provincial Pathway Review Project, please contact Jennifer Taylor, jtaylor@fieldhockeybc.com.

On behalf of the FHBC Board of Directors, thank you for supporting this important initiative!

FHBC will be hosting an information session regarding the new rules of field hockey that were implemented at the beginning of last year.

This session aims to ensure that all members, players, coaches, officials or managers understand the new rules and how they will be officiated when we next get the opportunity to return to the field and play the game we love.

This information session will be led by Lelia Sacré and Tyler Klenk; both are currently FIH rated umpires that have been involved with Field Hockey BC for a number of years. 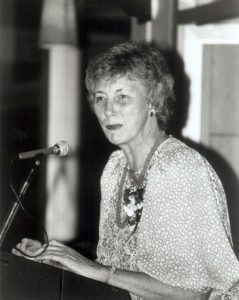 Field Hockey BC is saddened to announce the passing of Barbara ‘Bim’  Schrodt (1929-2020) at the age of 91, one of the most prominent names in women’s field hockey in Canada. She was an accomplished player, coach, administrator and supporter of the sport throughout her life.

Her influence to the sport is relevant and recognized to the point that FHBC presents every year the Barbara Schrodt Award to an individual “who has made a difference to women’s field hockey in British Columbia”.

Schrodt played a fundamental role in the development of coaches and umpires, and in the implementation of international field hockey rules in Canada. By hosting clinics across the country and through her handbook of ‘regulations and procedures’ – which became a model for establishing the national umpire certification used today – she was and always will be an important figure for our sport.

On the pitch, ‘Bim’ dedicated most of her career to the University of British Columbia and BC’s provincial teams. One of her numerous noteworthy achievements is the gold medal as a coach of the BC Team at the 1973 Canada Games. In addition to all these contributions, she also published the “Field Hockey for Women: a Guide to Basic and Advanced Play” in 1968, regarded as the first publication on women’s field hockey.

Graduating with a Bachelor of Physical Education from UBC in 1951, she was a teacher at the university’s Physical Education Faculty (currently School of Kinesiology) for thirty-seven years, leaving briefly to complete her PhD at the University of Alberta. Bim coached the UBC women’s field hockey team for eighteen years, between 1957 and 1977.

The Federal Government awarded Barbara with the Centennial Medal in 1967, honouring her contribution to field hockey, and, in 1981, she was named an Outstanding Contributor by the Vancouver Women’s Field Hockey Association. Furthermore, in 1999 and 2000, Schrodt was inducted into the BC Sports Hall of Fame and the UBC Sports Hall of Fame, respectively, as a builder of the sport.

As her BC Hall of Fame citation reads, “Schrodt is the only Canadian to hold honorary membership at three levels of administration – local, provincial, and national – the highest honour attainable. She also holds the Canadian Association’s Honorary Umpire Award, the BC Federation’s Gold Honour Pin, and is the namesake for both the BC and Vancouver’s perpetual Award.”

The field hockey community and FHBC cannot be thankful enough for everything that Barbara ‘Bim’ Schrodt brought to our sport. We send our most sincere condolences to her family and friends, and our hearts remain grateful.

Read her profile at the UBC School of Kinesiology here.

Read her profile at the BC Sports Hall of Fame here. 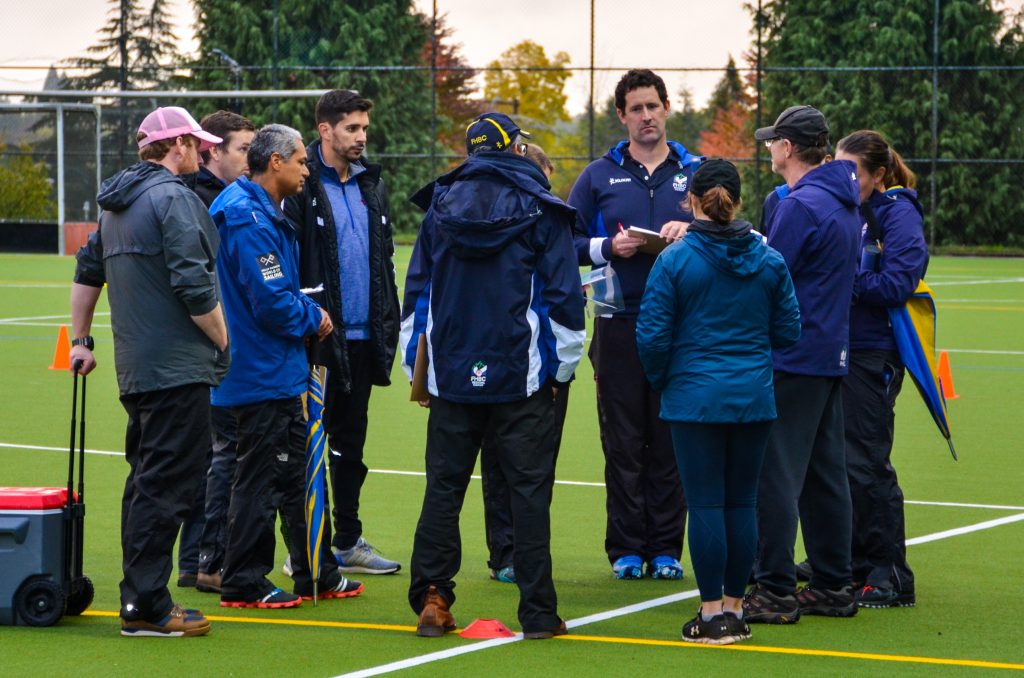 In order to encourage and aid the continuous development of our sport in the province, the Field Hockey BC Board of Directors has decided to support all NCCP (National Coaching Certification Program) coach education until the end of August by up to 50% (the MED courses will still be completely covered by FHBC).

Before signing up for any NCCP course, please contact our Sport Development Manager, Ben Harvey, at sportdevelopment@fieldhockeybc.com. Do not hesitate to inquire regarding any questions you might have about what is covered by this initiative.

For more information on the NCCP Pathway, click here.

Last Wednesday, June 17th, 2020, the Provincial Athlete Pathway Review Project team held a webinar with FHBC’s general membership  and affiliated clubs to provide an update on the status of the  project. We are now sharing the recording of the meeting for all of those who were not able to attend.

This webinar was the first of two planned sessions that the Provincial Athlete Pathway Review Project will provide to the field hockey community. The second webinar will be held in approximately 5 weeks and will include a presentation on the project’s draft recommendations to the Field Hockey BC Board of Directors.

You can watch the full webinar here (Q&A starts at 41:30). Access the project’s page here.