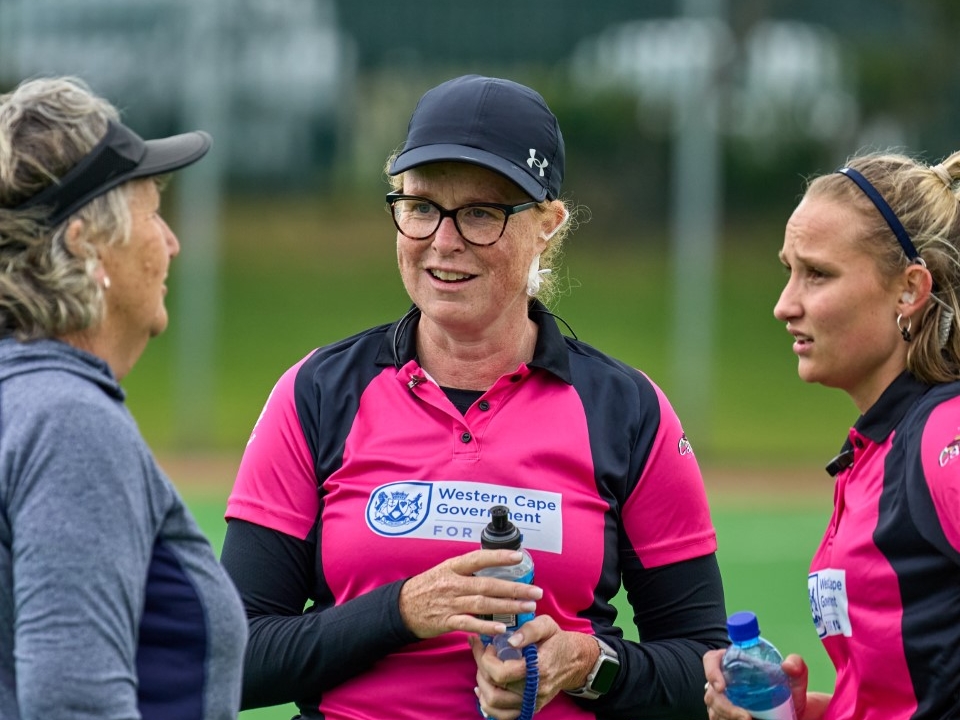 The FIH Masters World Cup returned in 2022 after a four-year hiatus. A strong Canadian contingent travelled to Cape Town, South Africa and this was more than just a team of players. Field Hockey Canada was represented by technical officials Tony Stewart, of Alberta, and Sanjya D’Silva, of Ontario, and B.C.’s Michelle McNaughton, also appointed assistant technical director of the tournament. Victoria’s Denise McGeachy was also present as an appointed umpire. B.C.’s John Sacre, Kent McKinnon and Nicky Graham were also present as coaching and staff for the Canadian men’s side.

“We were all very busy on a daily basis – especially Michelle who, as Assistant TD, was often at the pitch all day long”, recalls McGeachy, who umpired at the World Cup and was even selected to umpire the Over 60s Women’s Final. McGeachy and McNaughton are dedicated members of the Field Hockey BC Board of Directors – as President and Coaching Director. 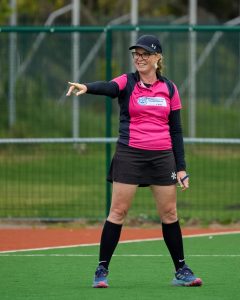 According to McGeachy, the coexistence between players, supporters, and officials from across the globe created a scenario of shared experiences and learning opportunities.

“Our community in Canada is so small, it was refreshing to umpire different players/teams and other umpires,” added McGeachy. “Every game was a blank slate and free from preconceptions – by both the teams and umpires.”

There was also a distinct and “refreshing” level of respect between the teams and umpires that McGeachy recognized. “This does not mean that there were not disagreements,” she added “After the final whistle, players, coaches, and managers always shook hands and acknowledged the umpires and each other, regardless of the outcome. We in Canada need to do a better job in this area.”

“The Masters World Cup was unlike any umpiring experience I have had in Canada. The quality of play was outstanding and the opportunity to umpire with, and learn from, the other umpires and umpire managers was a very enriching and positive experience.”

McNaughton, FHBC’s Coaching Director, took on the position of Assistant Tournament Director in Cape Town and was tasked with overseeing five pitches over three venues, so “there was always something to do or to solve” as she puts it.

“My ability to speak French came in very helpful numerous times,” said the Chilliwack club member. “I was assigned to the Over 45s – men and women’s – as their contact person and coordinator.”

This meant dealing with the teams’ logistics, uniform colours and a variety of technical inquiries.

“Every day I was assigned to a different pitch so, everyday was something different,” she explained. “Not only that ,we were mentoring a lot, and getting new officials in on games, shadowing and teaching. Also, jumping in wherever there may have been gaps on the table. A lot of early mornings, late nights, and awesome teamwork.” 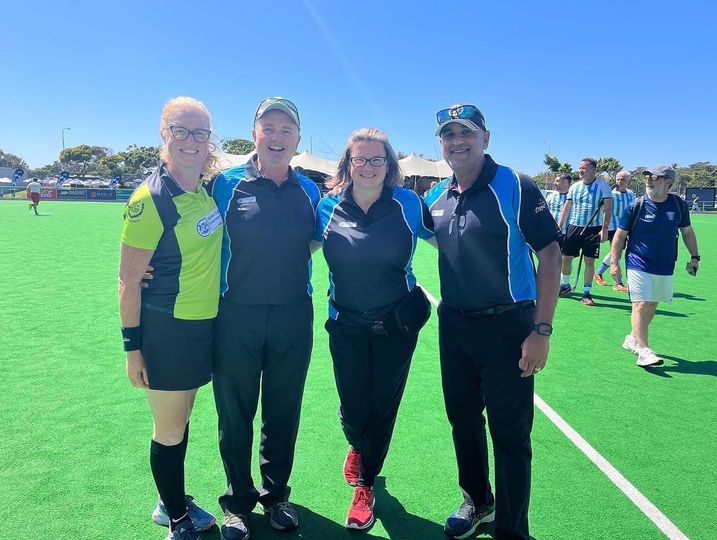 FHBC: What parts of this experience were valuable to bring back to help our sport in BC?
MM: “You have to understand, as an assistant technical director, it is not just the athlete experience that you oversee, it is everything – the spectators, media, the field, technical questions; it is observing how everyone does it just a little bit different. For me, it is the patience and confidence, also just to trust your officials team. The seven of us worked so well together, and the strength lied in recognizing the virtues and abilities of our on field team. The same applies to BC.”

FHBC: What did you notice about South Africa and the hosting community that inspired you?
MM: “I’d like to see us support our officials more, and have more opportunities by having more events. Additionally, utilizing Altius more, having that common database for all domestic competitions, as South Africa does, is really nice because you can pick up trends and concerns early, especially around cards and behaviors. You can also track athletes, which is a great recruitment and tracking tool.”

FHBC: What other lessons did you take away?
MM: “I am not sure I can even quantify it all: confidence, understanding. With so much going on, and overseeing the “most competitive” age division while tending to a venue or another division’s concerns, it gets to be overwhelming fast. Keeping my own personal journal and taking the time to make notes and observations was important; cultivating relationships to build mutual trust and respect.

“Also, giving credit and respect where it is due. A lot of times, people take expertise for granted; feedback both constructive and positive, as well as appreciation, go a long way. Being told I run a clean, strong field on more than one occasion was nice.”

FHBC: What’s next for you after this?
MM: “Making sure the people who mentored me and helped build my capacity know how thankful I am for their time, friendship and expertise. I will continue working with our wonderful staff, volunteers, and people to get more officials trained to start building the capacity to have officials at every major fixture.
However, for me personally, I would hope it would be more domestic and international appointments, both as a TO or as a ATD or TD. FHC National Championships? Pan American Games? FIH Pro League?

McNaughton and McGeachy have now returned to BC and brought with them significant experiences and lessons to help improve the sport in British Columbia and Canada. They are ready to share what they have learned; these kinds of opportunities will only help us grow as a community and open doors for future current and future field hockey officials.