By Ali Baggott and FHBC Staff, for Field Hockey BC

– Kelowna, B.C. – Several camps are under way as part of the Field Hockey BC talent identification process. One of the outcomes of the extensive 2020 provincial athlete pathway review project was to open the pathway up and be more open, transparent, and inclusive. The redesigned provincial athlete program now includes a three-stage model and the result is an initial talent ID camp happening in regions across the Province. A milestone for this process was the hosting of an interior-based ID camp that took place Jul. 17 at Mission Park in Kelowna, B.C. 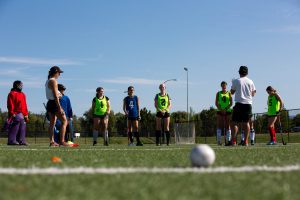 “It was a long time ago since I was a part of FHBC programs but what I do remember was that it was great to have the opportunity to play field hockey outside of the short high school season,” said Hennig who retired recently with 200 international caps to her name. “Without FHBC programs there aren’t really other opportunities for these athletes to play hockey. It also allows them to train with different athletes and learn from other coaches which I think is very important for a developing athlete.”

Kelowna Secondary School’s Alivia Venning is one of those athletes who values these opportunities.

“It’s been a long year when it comes to a lack of hockey,” said Venning, a midfielder at the U16 age group ahead of the camp. “I’m looking forward to being back on the pitch, training with my teammates, and working with the fantastic coaches.”

Venning is originally from Bermuda and moved to Kelowna in July 2019 but thrusted herself in to what hockey should could access. She worked closely with Ben Fecht to coach an under 14 team and is eager to absorb what she can.

“There are definitely challenges to playing in the Interior compared to Vancouver (or Bermuda, where we played on turf as well),” described Venning of the lack of water-based facility access in the interior. “I hope that I will be able to bring my training from Bermuda, as well as my time on the Kelowna Senior Secondary team, with me to the Talent ID camp. Unfortunately, the heat and smoke haze this week will also add some challenges. We are very fortunate to have a great facility here in Kelowna, as well as great coaches.”

Two male and two female talent ID camps are also happening on the lower mainland in July and August, while an additional camp is planned for Jul. 23-25 on Vancouver Island. All camps feature consistent technical and game play opportunities, with a vigorous, transparent and fair evaluation matrix. Athletes will also be able to receive qualitative and quantitative feedback to help them move forward in their field hockey development. Coaches from other regions are also being utilized at camps to provide neutral perspective and opportunities for athletes to engage with new coaches.

“It’s always refreshing to have a fresh set of eyes and bring a different culture or view of hockey to another region,” said Keogh, a Vancouver-based coach who made the trip to Kelowna for the camp. “It also gives me the opportunity to learn from other coaches. It’s important for coaches to travel to other areas to share their experiences and learn from others. Also, every region has the right to be assessed fairly, regardless of your location. It’s all about what you can offer.”

An important Field Hockey BC guiding principle is to provide for opportunities wherever and whenever possible to help grow the game and give as many young players the chance to love and enjoy the game. 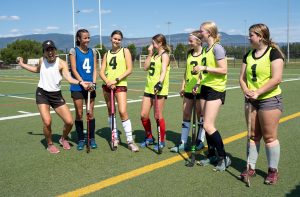 “Field hockey really helped shape who I am today as a person and taught me a lot of lessons and skills that I have taken into my life and career beyond hockey,” acknowledged Hennig. “My hope is that through coaching I can help impart some of those lessons on the next generation and provide them with the opportunity to learn and grow through the sport of field hockey.”

“If athletes want to pursue field hockey at a high level it becomes about so much more than technical skills. While having less training and competition here as well as lack of access to turf may limit the opportunities to develop and refine technical skills, things like physical fitness, tactical understanding, work ethic and positive attitude are all things which are of equal importance and are things athletes can work on and control themselves. To find success they need to make the most of each opportunity that they have, soak up as much knowledge and be diligent in applying what they are learning each time they step on the pitch. There are a number of national team players, including myself, who have come out of Kelowna having grown up playing on grass, who I think are great examples to look to of how one can find success even with certain barriers.”

Hennig among other interior greats such as Thea Culley, Natalie Sourisseau and Abigail Raye are all Field Hockey BC products who overcame a variety of obstacles to become outstanding international players. For many who attended the talent ID camp this past weekend, this could just be the start before their names are added to that list.

“Dani has been an important part of the Interior Regional programme since I joined,” Venning highlighted about having the national team stand out at the field. “She is an inspiration and a role model to all of us in the program. We have been very fortunate to have an accomplished and talented field hockey player such as Dani involved. She is very approachable and is a great coach to all of us.”

Whilst there is no formal Field Hockey BC Provincial Representative Team Program this year due to COVID-19 restrictions, this summers Field Hockey BC Provincial Talent ID Camp Program is an opportunity for BC’s top athletes to be identified and thereafter invited to participate in Field Hockey BC’s new Elite Program. The new Elite Program is designed to assist athlete preparation for participation and/or selection or re-selection to the National NextGen and National Team Program.

For more information on Field Hockey BC’s Provincial Talent ID Camps and Pathways be sure to check out the website. Upcoming camps include the Victoria-based camp on Jul. 23-25, U16 lower mainland girls on Jul. 30-Aug. 2 and two male camps for U21 and U18 happening Aug. 13-15 and U16 boys happening Aug. 20-22.