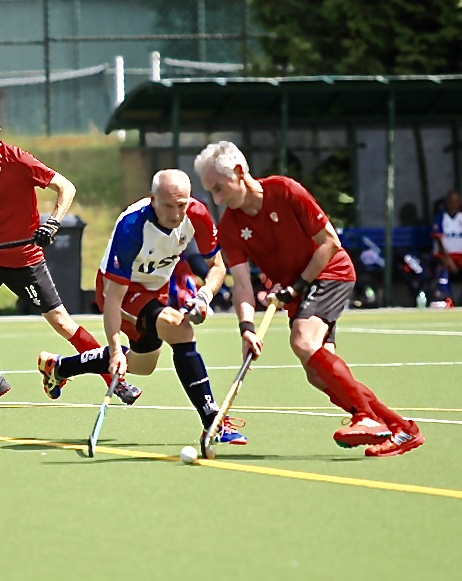 Gord Plottel (right) playing for the Canadian 60+ team against the USA 60+ in Vancouver, in June of 2019

Gord Plottel (on the right), from Vancouver and a member of the Vancouver Hawks Field Hockey Club, was the captain of the Canadian 60+ team in their first participation on a Masters’ World Cup, in Barcelona 2018.
His experience with Masters’ field hockey has allowed him to revive the competitive challenges and also enjoy the social element of the sport, connecting with athletes around the world. “Like the Men’s National Team, we play our hardest on the field, but, unlike them, we get together with the opposition for a beer after the game!”, Gord says. “It’s that combination of competition and camaraderie that makes Masters’ hockey appealing to older players.”
According to Plottel, aside from staying involved in the sport, playing Masters’ hockey has provided him a goal for fitness and continued athletic improvement regardless of age. Playing competitively is an incentive to “get out for a run in a rainy morning or learn a new hockey skill”. As Gord points out, “ it provides a valuable opportunity to exemplify the ‘long’ in Long Term Athlete Development”
Posted in NEWS, Players.