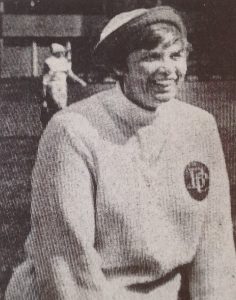 Our field hockey community lost a very dear and important pioneer of our sport when Joyce Harris passed away in October 2020 at the age of 94. Field Hockey BC would like to extend condolences to her friends and family, and remind everyone of her contributions to Canadian field hockey.

Born in England, Joyce moved to British Columbia in 1957 where she became a stalwart in goal at the Provincial level and in the Vancouver Women’s Field Hockey Association. Former National team member Moira Colbourne recalls: “Joyce played with me in the Vancouver Women’s league on the Ex Britannia Club as our goalie and was outstanding”. She was awarded the Watson Trophy in 1960 as the League’s Most Outstanding player – an award she could have won many times had rules allowed. Joyce later became a founding member of the Ramblers Hockey Club.

Moira continues: “Joyce also played on our B.C. Rep teams for many years. She was our Captain for the 1971 Canadian National team, where we travelled to Hong Kong, Australia and New Zealand for the World Tournament.” Joyce was at her best in goal on that tour, leading Canada to a 10th place finish.
In 1973, Joyce was manager of the Canadian Women’s Touring team that travelled to England and Wales. She also served as umpire on that tour, and continued umpiring at the National and International level for a number of years.

Following is an article published in the newsletter for the 1969 Nationals (Courtesy Jenny John):

“A goalkeeper is really the first line of attack, not the last line of defense. That is a maxim of one of the best women field hockey goaltenders in the Canadian sport.

She is Joyce Harris of Vancouver, and she is a good reason why the British Columbia team won the gold medal.

Off the pitch, she is casual and slow moving. In the game, she is on her toes and the bouncingist goalkeeper in action.

“I’ve never been injured,” she says. “The odd ball in the stomach maybe, but you let your body go back and you can take it.” A goalkeeper needs agility, ability and confidence. “Without confidence, she’s going to be afraid and won’t be as good.”

Her hockey playing started as an 11-year-old in High Wycombe, Buckinghamshire, England. She later played for the South of England team. In 1957, she went to a friend’s wedding in British Columbia and she is still here.

Since then, she has played for Canada (which meant she had to become a Canadian citizen) in the United States and Europe. Although she is now 37, she hopes to be fit enough to try for the 1970 national team which will tour New Zealand.

Her job is secretary at an 1,800-student Vancouver high school, and after business hours she is writing, as co-author, a book to be called “Field Hockey for Women”.

Joyce retired to Gibsons on the Sunshine Coast, where she played and organized 9 hole golf with members, played Bridge and always entertained. As Jenny John says and those who knew her remember, “Joyce had a wonderful smile and very infectious laugh. Her legacy will be her laughter.”

Rest in peace, Joyce. You will be missed.